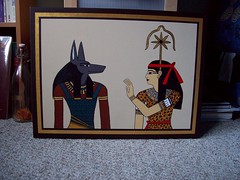 The House of Netjer (Kemetic Orthodoxy) seems to be the largest group of Kemetics. The pillars of faith are Netjer (the gods, divinity,) the Akhu (our ancestors, known and unknown, and all the ascended dead,) the Nisut (the religious quality of kingship,) and Community (both the community of the faith, and connectedness to the community around you.)

Members perform a daily rite, called Senut, at their shrine. It includes both ancient and modern elements. The ritual parts of it are meant to be done without variation, so the power of the rite builds by people all over the earth performing it. The short opening ritual is followed by free-form prayer, meditation, magical actions, or creative acts of devotion (singing, dance, writing, etc.)

Senut begins with a ritual purification- blessing water and natron (a salt used for purification,) and ideally, a shower or bath.

The standard ritual offerings include flame (most often a candle or oil lamp) that connects the rite with the first light of creation. Incense is offered as the scent of the gods. Cool water is used for a libation, which recalls the life-giving inundation of the Nile. Other offerings are made at the discretion of the member. Members living in dorms, or travelling often can’t use an open flame or burning incense, so they substitute electric tea lights, scented oils, and other substitutes.

Beginning members are asked to perform Senut without any icons or statuary of the gods, keeping their options open and not just picking the most familiar. Many members elect to have a Rite of Parent Divination performed, which divines one or two ‘parent’ deities, and a number of ‘beloveds.’ They can then take a “Shemsu Oath,” vowing to honor those gods first.  Shemsu (“follower”) members place icons of their parent deities and beloveds on their shrine.

Members are also expected to honor their Akhu, or ancestors. This may include blood relatives, and also spiritual ones. A separate Akhu shrine is employed for this, and the offerings are treated differently than those given to the gods.

There’s a free beginner class, offered three times a year, that explains the group’s approach and gives the Senut rite and suggestions for setting up simple shrines. The application is here.

After taking the class, the beginner can ask to be considered a Remetj. (“royal subject”)