Kemetics honor the gods and goddesses of ancient Egypt. The name “Kemet” came from one of the  Egyptian names for the country, meaning “Black Land.” This referred to the rich black soil that the Nile brought each year. 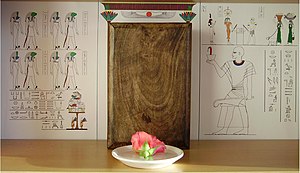 Some Kemetics use a Naos or Kar-shrine- an enclosed cabinet that holds their icons. This follows the practice used in most ancient Egyptian temples.

Most Kemetic revialists (reconstructionists, etc.) look to ancient texts and recent findings of Egyptology to expand and enrich their practice.

There are also versions of Wicca that honor Egyptian gods and goddesses- this path is often called “Tameran.” Some Eclectics do as well. Often these distinctions blur in individual practice.

Kemetic Orthodoxy or the House of Netjer is one of the largest groups. There’s a summary of their shrine and ritual practice here.